Efficient Power Solutions Explains: Why is the uptake in drive technology solutions still low, particularly in the retrofit market?

Inverters or Variable Speed Drives (VSD or sometimes VFD – Frequency) first came to fruition in the 1960s.  Today, they are a mature technology. The principle is simple. They offer the enhanced control of fixed speed AC motors by varying the supply frequency to the motor dependent on the load requirement. 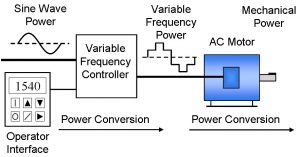 For applications such as rotary pumps and axial fans where liquid or air is controlled by flow restrictions (dampers or valves), the energy saving potential of VSDs is considerable. When surveying sites, it is always surprising how many fans and pumps are operating against a flow restriction which increases the electrical load.

From an energy point of view, even worse than not fitting an inverter is to install one and then running the motor continually in local control at the mains frequency, generally 50Hz, with the restriction still in place. All this has succeeded in doing is increasing power by around 3 to 4 % and the VSD becomes an expensive plant room obstruction.

Any AC electric motor will only draw the power it requires to do its function. Therefore any restriction to flow will increase the energy consumed by the motor. It is therefore better to match the supply of air or fluid to the requirement.

The tendency to over specify plant

Traditionally there has been, and continues to be, a tendency for designers to over specify plant.
Induction motors are, by their nature, efficient devices compared to other sources of motive force and are very often forgotten once installed until something goes wrong or improvements to a process are made. This means that any over specification is often compounded over several years.

Despite the widespread acceptance of the use of inverters and the inclusion in many design specifications on new build, the uptake in the retrofit market has been low, with the reasoning behind this being unclear. Site engineers are often too busy keeping process equipment running to worry too much about services and the old adage of “if it isn’t broke” often still prevails.

As part of any energy reduction survey or program it is vital that an overview of the operation of air handling units, fans and pumps should be carried out to identify if the installation of a VSD and control would not only save energy but also improve performance or process.

Good examples of additional control could include supply and extraction fans on AHUs linked to occupancy levels or CO2 content, with the speed of the fans slowing when CO2 levels are low.

Additional benefits for the fan motor savings would include less heating or cooling energy to replace that being extracted, reduced stress on the motor and fan, especially during the start-up phase, as well as easier control of room temperatures.

In order for this to happen correctly, all VSD must be linked into a building control system and operate in conjunction with a pre-programmed approach. Any manual input that can easily be altered can quickly reduce the benefit and often results in scenarios described above.

Efficient Power Solutions is able to offer a complete range of guidance and solutions on variable speed drives technology. This sits alongside a portfolio of energy services including energy surveys, energy monitoring and power quality surveys. This is all backed up by comprehensive reports that allow our team to advise on the best fit solution for your requirements.

About the author: David Taylor is Operations Manager of Efficient Power Solutions. David is an expert in VSD technology. His early career saw him serve his time and several subsequent years at a major electrical motor manufacturer. In more recent times he has worked as an energy saving consultant as well as in technical sales support roles with several VSD suppliers.